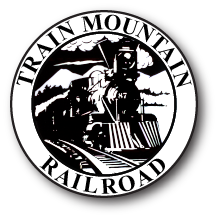 Train Mountain was founded in 1987 by Quentin Breen. Quentin assembled the property and developed over 25 miles of track before he passed away in 2008.

In 2009 the IRS recorded $13.8 million dollars of tax liens against the Train Mountain property based on Quentin's tax problems. In 2010 a law suit was initiated by Fred Vertel to find a way to discharge the IRS liens. An August 1, 2012, Settlement Conference resulted in Friends of Train Mountain being appointed custodian of Train Mountain on November 1, 2012, with the authority to apply to the IRS to discharge the liens. A proposal was made to the IRS. Whereas if the IRS accepted the proposal, Train Mountain would be owned by Railroad Institute which planned to use the facility to provide railroad education.

On May 8, 2013, the IRS completely discharged the leins. After the leins were discharged, Train Mountain Institute was able to accept tax deductable donations as a 501c3, and began implementing its plans to operate Train Mountain for educational purposes.

Friends of Train Mountain continues to build new track. Train Mountain Railroad offers members access to the track, organizes meets and events, and coordinates the volunteer work projects. Klamath and Western railroad continues to offer rides to the public. Railroad Institute will not initiate its major educational programs or accept donations until the IRS has agreed to discharge the liens and allow the property to be transferred to Railroad Institute.

Train Mountain Railroad is a mutual benefit 501c7 membership organization. Membership is reasonably priced and open to anyone interested in railroading. The club operates restricted access tracks on which members can operate their personally owned trains or club owned trains. Members may bring guests to the railroad.

The Klamath & Western Railroad, which leases approximately 2 miles of track on Train Mountain, gives rides to the public every Saturday from 10:00am to 3:00pm from Memorial Day Weekend through Labor Day Weekend.

Train Mountain Institute owns Train Mountain and is developing an educational program that shows the history of railroading, how railroads helped settle the west, scientific railroad advances, state of the art signaling systems, and other related history, through guided tours of the Train Mountain Railroad Museum.

These organizations work together to make this World Class Facility everyone's favorite railroad. We invite you to get involved and have more fun. Only by seeing and experiencing the "World's Largest Miniature Railroad" first hand will you be able to believe what Train Mountain has to offer.